Not Counting Chickens: Insights on Community-Led Development from Ramón Daubón

Ramón Daubón has extensive experience in the international development sector, including with the Ford Foundation and USAID. He spent a number of years with the Inter-American Foundation (IAF), starting as a program officer for Chile in the 1980s and serving as Vice President for Programs, before becoming president of the nonprofit consultancy The Esquel Group. Ramón, thank you for joining me!

Thank you for inviting me – the IAF is my favorite organization.

It’s important to remember that government is not separate from the people. “Government” is us. But the government doesn’t necessarily automatically carry out the will of the people. It responds to scrutiny. It is the responsibility of every citizen to know what leaders are doing and keep their leaders on a leash.

Alexis de Tocqueville described civic engagement as the “art of associating.” The first phase is identifying the nature of the problem a community would like to address, and the next phase is a process of intense deliberation. People are not going to agree on exactly what they should do, but you can get people together in a Venn diagram to agree on a small piece of it, and that is  the beginning of what I call “public will.” Once you have that point of agreement, you can bring proposals or requests to the municipal government.

For example, while I was at the IAF, we were supporting participatory budgeting. The IAF used to co-sponsor an Inter-American Conference of Mayors once a year in Miami and mayors told us how much constituents appreciated weighing in on where their public money was going. This has been borne out by the IAF’s experience over time. For example, recent grantee Instituto Brasil Central has noted that citizens reelected mayors who embraced participatory budgeting, and voted out those who resisted it—reinforcing the connection between civic engagement and the responsiveness of local democratic governance.

2. How can a foundation like IAF spur and support civic engagement and good governance?

To promote civic engagement, you need to go back to the beginning of the process, before what seems like the beginning of the process, and ask, “What is the actual problem being addressed here?” “Whose voices are not being heard?” Participation is key to framing the issue at hand correctly. If the grantees used a participatory process to probe at the root of the problem and alternative solutions from a range of perspectives, actually designing a project to address it becomes a relatively simple technical question. That’s the point when a funder can effectively step in and avoid exacerbating local inequalities or inadvertently dictating the direction of a project.

3. How can you tell that “development” is happening?

What needs to happen for “development” to take place is a change in mindset. It’s something that people—even at the IAF—too often forget. Traditional development practitioners think that community development is about how many chickens you raised, how many children you educated, or how many wells you built. It’s not about counting chickens. Just throwing money at a problem doesn’t make it go away unless people take ownership of it. The important thing is what’s gained from the experience. It’s people seeing what they can do. It’s the agency. If they know that they can do something, what will they do next?

4. Which IAF project during your tenure would you consider particularly successful in building agency and why?

The best example I can think of is a project the IAF funded by an organization called Centro de Estudios para el Desarrollo Regional (CEDER) in Chuquibamba, Arequipa, Peru. CEDER taught farmers to produce cheese, butter, and yogurt, and how to build or improve their own basic milk-processing plants to increase their incomes. 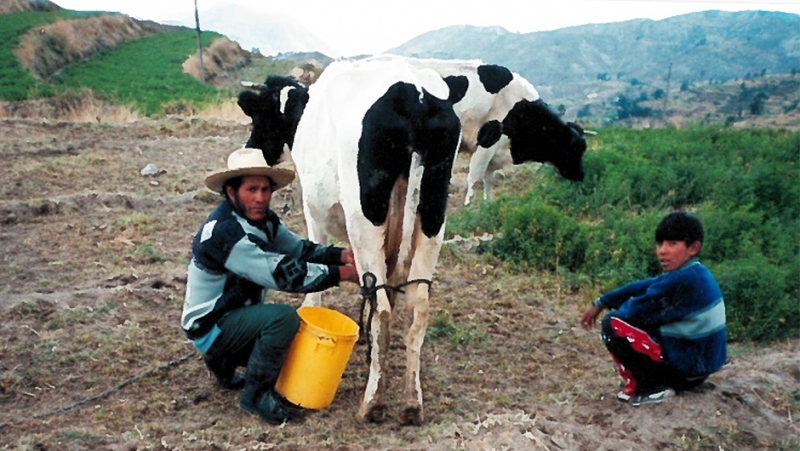 I sat in on a meeting with that group years later and I was astounded at how they were buzzing with plans. Out of everything they tried, they had discovered that they were excellent at making cheese, so much so that they became well known throughout the area. As their popularity grew, other groups started selling their cheese as “cheese from Chuquibamba.” The people from Chuquibamba were furious and went about getting a mark of origin for their cheese, like France  has for champagne. You know how it’s not champagne unless it specifically comes from the Champagne region of France? The mark of origin, which they achieved, allowed the group to build brand awareness locally and when exporting beyond the region to places as far-flung as Brazil.

The ideas kept coming. CEDER wanted to find a way to attract people to their town so they started planning a Cheese Festival that would have a series of events and they would choose a local girl to be the Queen of Cheese: La Reina del Queso. And, recognizing that  the town didn’t have much to offer visitors to eat, they launched the precursor to a Bed and Breakfast system in Chuquibamba. They also needed to make their little town more accessible, so they started talking to city officials about improving transportation infrastructure.

This was all happening in a single meeting. That’s what happens when people realize what they’re capable of doing together.

Thank you so much for your time and your insights!

“We Can Get Through This Together”

Why are we so proud to celebrate our 50th? Just listen to our grantee partners…

Few would have imagined in the early days that former IAF grantee partner Fundación Defensores del Chaco would become a youth-led powerhouse mobilizing entire towns to advocate for themselves. But what started as a street soccer team became a space where young people and their communities could bring their problems and find solutions together.

Not Counting Chickens: Insights on Community-Led Development from Ramón Daubón

"Government is not separate from the people. “Government” is us. But the government doesn’t necessarily automatically carry out the will of the people. It responds to scrutiny. It is the responsibility of every citizen to know what leaders are doing," said Ramón Daubón, former IAF Vice President for Programs, in our recent conversation.

The Asociación de Forestería Comunitaria de Guatemala Ut’z Che’ is one of ten winners of the 2020 Equator Prize. For the seventh time in the prize’s history, the United Nations Development Program has recognized an IAF grantee for reducing poverty by sustainably managing natural resources.