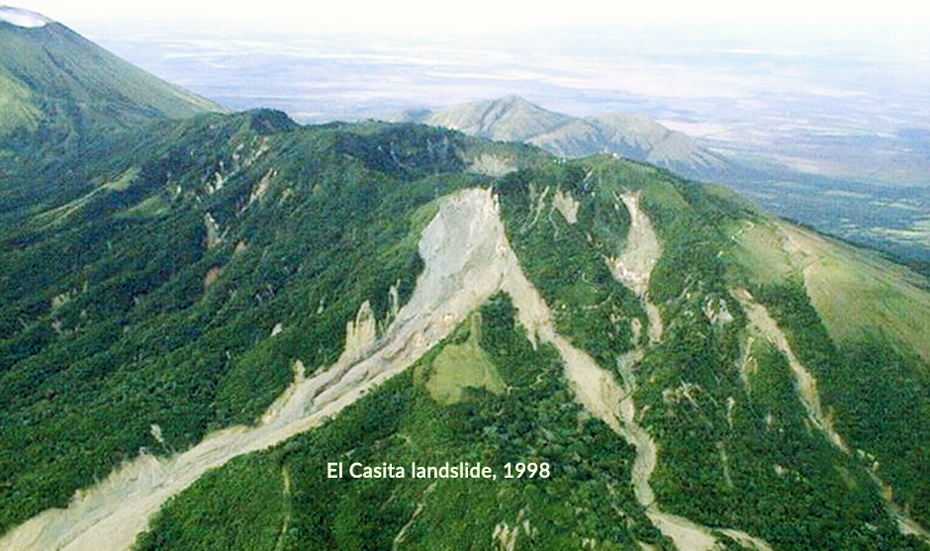 “Twenty years have passed and the memory of those dark and stressful days comes back. Posoltega, which is 19 km east of the city of Chinandega and at the base of the Marrabios Mountains along the Pacific Coast, was the most affected location in Nicaragua from Hurricane Mitch. The rainfall accumulated in the cavity of the upper part of the Casitas volcano. When it reached its capacity, it produced a huge mudslide and a deafening whistle sound. Entire families were carried away. Bodies were strewn along the edges of the landslide all the way down to the beach. The damage to infrastructure in the Chinandega Department was severe, including various bridges destroyed on the main Leon-Chinandega highway. But the worst loss was that of human lives.

“The population was not prepared for this type of disaster, with no means of communication or technical monitoring to alert people about oncoming danger. We have learned there shouldn’t be human settlements on potentially unstable mountain slopes. Some lingering actions and issues include reforestation of the affected area and addressing emotional consequences.”

“In the municipality of Posoltega, more than 3,000 people from the towns of Rolando Rodriguez and El Porvenir were buried by a voluminous river of mud, sulphur, and burning sand from the Casita volcano. Survivors say that on the night of October 29th they heard strong explosions coming from the volcano but dismissed it, as this was normal during heavy rains. On October 30th around noon they heard thunder close by and that was when they saw an enormous river of lava unleashed, carrying away everything in its path, and there was no time to flee.

“The mayor at the time cried out for help. People came together and built dozens of warehouses in Managua where food, clothing, and other articles were collected for those in need.

“[At that time] U.S. President Bill Clinton offered support to Nicaragua through debt relief and inclusion in the Highly Indebted Poor Countries initiative. The Spanish Red Cross and foreign doctors helped build schools and clinics. CARE built water projects in new communities. The municipality, with funds from Spain and the European Union, financed electrical infrastructure. Legend has it that when Clinton asked a boy if he had a wish, he said he wished they could bring his family back, moving Clinton to tears.

“At that time AMDES began its intervention with the survivors of the Casita landslide in their makeshift settlement. AMDES worked on psychosocial issues and physical therapy and rehab for women, men, and orphans so they could get on with their lives.”

“I was living in El Salvador when Mitch hit. Then a year later I went to Nicaragua and started to work for an organization called the Rural Women’s Committee in Telica and Posoltega. From what people told me, Mitch was catastrophic; rivers and creeks flooded and carried everything away. There were houses half submerged in mud where you could only see the red tile roofs. The geography totally changed: places that had a lot of vegetation were now covered with dirt and sand. Because I was a social worker, people told me their stories.

“Then I worked for the Xochilt Acatl organization in the Larreynaga municipality, where I learned more through the displaced families from the Casitas landslide. This organization provided moral support and assistance with housing. One particular case involved a woman who ran from the landslide carrying two children in her arms. Following the event, she suffered from PTSD, which partially paralyzed her. Female psychologists began to work on people’s emotional recovery. When her PTSD was finally addressed, she could move her arms again.”

“Hurricane Mitch affected the poorest families in Jinotega Department, worsening family economies. One of the most affected neighborhoods was German Pomares, where countless families lost their homes and were relocated. One of the saddest moments was when the hurricane came through the cemetery and we watched the river carry away caskets. It was like reliving the loss of a loved one all over again, seeing their remains carried away by the river. These images are engraved in our memory.

“Locally and nationally, the magnitude of the disaster made people reflect on strategies to prevent these events. There was a publication that outlined all the steps the government needed to take. Among the most urgent needs were housing, food, employment programs for the displaced, and medical attention. Later, there were programs to design safe and healthy housing with all the basic services, and included the participation of families in the design and construction. This model strengthened communities and social organizations and fostered health awareness and disaster preparation. Jinotega drafted a municipal risk management plan.”

Reflections of the 20th Anniversary of hurricane Mitch

Off to Meet #FLOTUS

Community Resilience in the Time of COVID-19: Lessons from the 2017 Mexican Earthquakes