Jim Adriance worked as a Foundation Representative at the IAF from 1986–2004, managing in succession the portfolios for community-led development in Panama, Nicaragua, El Salvador, Honduras, and Guatemala. Today, Jim consults for the Global Evergreening Alliance, a network of environmental, agricultural, and research groups aiming to scale up agroforestry and soil conservation.

Jim was interviewed by Sarah Stewart, a current Foundation Representative who also works with Central American grantees, including grantees Jim supported like COSECHA in Honduras. Sarah shares her takeaways after Jim’s recollections.

Jim explains that many indigenous communities felt a tension between using modern farming methods and traditional approaches well-rooted in the region. Many rich, valuable techniques came from the past, but farmers had to analyze the labor investment of each versus the benefit, as well as navigating outsiders’ opinions about which practices were considered authentic.

Terracing, the practice of shaping steep, hilly land into a series of stepped flat fields to grow crops and prevent erosion, was one key example. Traditional terracing using rock walls was a good idea in theory, but labor intensive in practice. 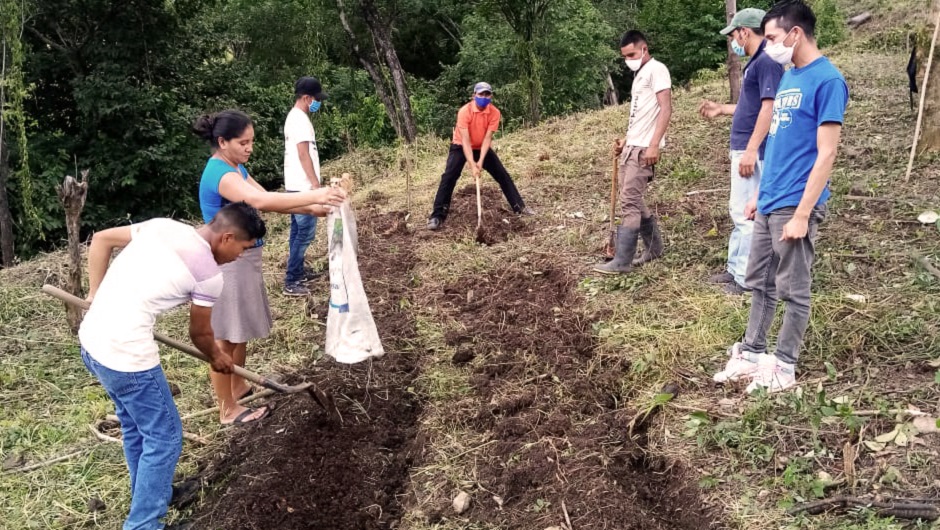 Farmers married positive aspects of terracing with current needs and developed a soil conservation technique called labranza mínima (“minimum tillage”) in which farmers only till the area they are going to use and gradually cultivate hillsides that are stable and apt for farming, using live plants or rocks for borders and working with the contours of the land.

In the 1980’s, Guatemalan indigenous leaders advocating for more environmentally-friendly techniques, including a focus on soil conservation, came to Honduras to share these techniques as well as the idea that indigenous farmers can learn from each other—they do not need to rely on a formally anointed technical expert to improve their production. Their ideas and methods spread across Honduras. Farmer organizations that espoused these techniques sprouted up, including the Asociación Consejeros para una Agricultura Sostenible, Ecológica y Humana (COSECHA) in 1992, which later became an IAF grantee in 2014.

“I think the genius of COSECHA was this co-generation of techniques together with farmers,” Jim recalls. They invested in farmer-to-farmer knowledge exchanges and research into agricultural issues such as which plants work best as “cover crops” to restore soil health.

COSECHA took a unique approach of starting with very small groups of farmers that would pilot, study, and evaluate techniques. They transmitted what they saw and learned to others. They started with basic approaches and adapted them to local conditions. This idea of testing, adapting, and applying practices to one’s own parcel is a basic tenet of COSECHA that has yielded long-term sustainability and a multiplier effect. Organizations like COSECHA learned that ideas stick when farmers are involved at all levels, from research to implementation.

According to Jim, the key role for nonprofit grantee organizations in sustainable agriculture is to spread ideas across communities and across generations: “There’s a notion that farmers will talk to each other naturally,” Jim commented. “But it’s really odd for one farmer to go over to another community and just volunteer to share his or her techniques. If organizations can earn trust, then they can promote real exchange. Absent a benign, trusted facilitator, it’s hard to make information spread spontaneously.”

The IAF’s Approach to Fostering Innovation

Jim explains that some specific technical innovations from that period included sustainable agriculture and agroforestry practices for difficult terrains, techniques for growing more crops on small plots, and the introduction of cash crops such as tomatoes as a gateway product to enter the commercial market.

But the real innovation was around methodologies and approaches, such as increasing awareness of indigenous cultures, engaging with farmers, cultivating leaders, and promoting the idea that innovation itself is ongoing. As Jim puts it, “We’re not about pushing a particular idea, we’re about trying new things. If you get the methodology right, innovations come out.”

To produce and/or capture ongoing innovations across the region, farmers in isolated and underserved areas needed access to peers from whom they could learn about sustainable agricultural practices going on in other areas that could be adapted to their own. Bringing farmer exchange programs to under-resourced, rural areas and getting farmers involved in sharing their knowledge as well was an innovation in itself.

Indigenous peoples have developed agricultural production methods over centuries and dealt with issues that resonate today, such as concern for soil health and using local natural resources effectively. We should look to understand their approaches to food production, because their ways have persisted over time. Not only do we need to seek out lessons from these groups, but we need to help them amplify their efforts to raise awareness of these practices in other areas where they may be applicable.

Foundation Representative for Honduras and Belize

A lot of what Jim speaks about resonates for the IAF today. Soil conservation, the use of cover crops, and maximizing resources such as water are even more critical as conditions for growing crops become increasingly unpredictable. While soil conservation has been a top priority for decades, something newer in importance for COSECHA—and other IAF grantees working on sustainable agriculture—is nutrition. COSECHA has adapted traditional foods to incorporate nutritious ingredients from fruits and vegetables grown in farmers’ gardens; the menu now includes tacos de papaya (taco with shredded green papaya filling), tortitas de hoja de remolacha (beet leaf burger), and pastelitos de hojas de rábano (fried pastry with radish leaf filling).

With support from the IAF, COSECHA has trained 60 community residents who promote sustainable agriculture and nutrition practices. These agricultural promoters have reached over 600 families in 16 communities that now grow their own food in small areas and consume a diverse and nutritious diet over the entire year. COSECHA receives countless visitors from other countries eager to learn the secret of farming under extreme conditions. COSECHA will continue to be a model for achieving food security and supporting farmer-to-farmer learning. And the IAF remains committed to catalyzing advancements—particularly indigenous-led innovations—in sustainable agriculture.

In an interview, former Foundation Representative Jim Adriance describes how the IAF has supported farmer-to-farmer exchanges so Indigenous groups can spread sustainable practices and innovations throughout the region.

The InnovAction Challenge will connect outstanding young entrepreneurs in Latin America and the Caribbean with tools and resources to respond to the needs of communities most severely affected by the COVID-19 pandemic.

The IAF and Danone Argentina are joining forces to strengthen recycling systems and economic activity in 35 Argentine cities in alliance with the Danone Ecosystem Fund and Fundación Avina.