How Forestry Research Is Teaching Me about Gender Issues

Doing fieldwork on grassroots development in Brazil right now can be discouraging. The country is going through a profound political and economic crisis that is eroding decades of advances in legislation and practices regarding human rights, conservation, and sustainability. As my concerns about these issues continue to mount, my research on community-based forest conservation in southern Brazil, which is being supported by the Inter-American Foundation, has unexpectedly given me insights that I otherwise never would have gained.

The conversations and interactions providing me these insights are not always directly related to what I am researching, but they help me better understand the social dynamics at my field sites. For example, the role of gender and the issues associated with it are not at all the focus of my research, yet issues related to it shout at me everywhere I go in the field. They are in the news I read every day and in the conversations I have in the field, at the university, on social media, even when I go out to a restaurant. 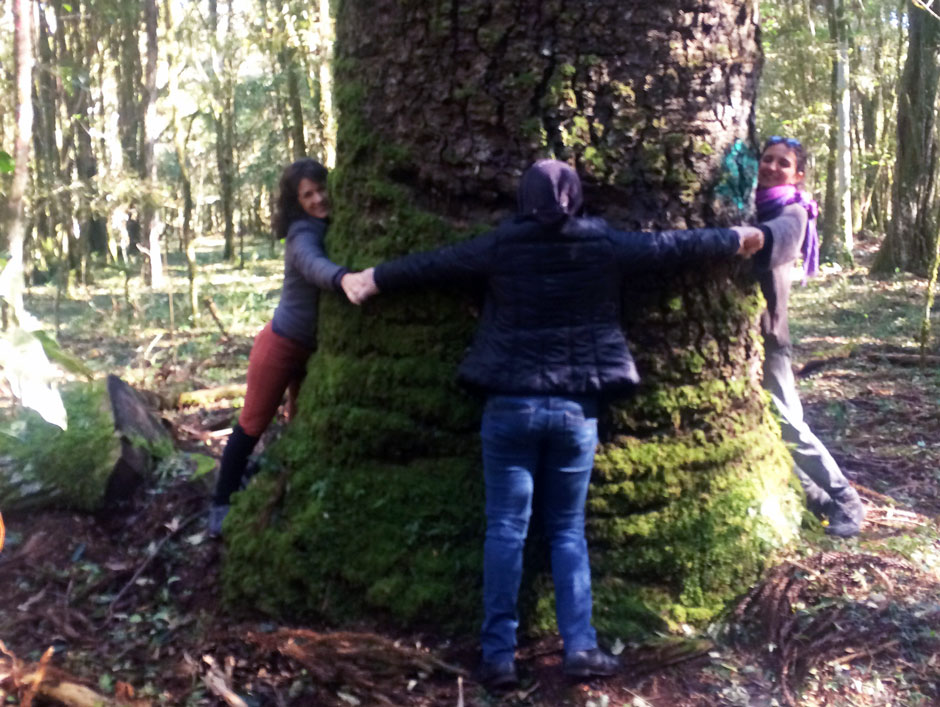 A research on community-based forest conservation in southern Brazil.

As I watch and listen, I cannot help but look at the world with a heightened awareness of how gender issues affect society.  I am trying to understand what kind of “feminism” makes sense to me, and what kind of “feminism” makes sense to other people and to society in general. I recognize that the agenda I find important to me might not make sense to other women. I do believe that women have to look after each other and that doing so sometimes involves speaking up. However, figuring out when and how to help other women is not that simple. There is no recipe for how to respond to each and every situation. In extreme cases the appropriate action may be to encourage a woman to call the police and report an abuser. In other situations the best thing to do might be simply to encourage women to participate in the meetings of a local farmers’ association and speak up about whatever they believe are priorities for their community.

Sometimes these types of situations arise when I am doing fieldwork. The other day my field assistant and I arrived at a community and went straight to the house of a farmer I needed I talk to. He was not there, so his wife received us. I was disappointed because I really needed to talk to him before I could continue on with my agenda for the day. Little did I know that talking to this woman for the whole morning was going to be so much richer than sticking to my plans.

She invited me and my field assistant to sit down as she continued to clean the house and take care of her many other chores, which included giving medicines and vitamins to the family’s livestock, especially important during the winter. I realized that she had as much of a daily routine to carry out as I did, yet she dropped it all to be able to spend time with us.

She was curious about my research and peppered me with questions about it. She told us that she also wanted to study biology in college, like I did, but life got in the way. She failed an entrance exam for the college nearest to her town, and not long thereafter got married and moved to her husband’s community. She said that although she is happy with her marriage and with living in the countryside, she would like to start up her studies again, but that one of the obstacles for this now is that her husband is not comfortable with her moving to another town to attend college.

“We don’t have to like it, we just accept it,” she said of her overall situation. “I got married and now I have to live here.” I guess that by “we” she meant women in general.

Yet, here was a dynamic woman filled with energy, dreams, and talent. When she learned that my field assistant was from Spain she told us that she studied Spanish as a second language in school.  When I told her my research included collecting soil data, she told us that she had carried out most of the data collection for a geography research project that her brother had conducted in her community, and then monitored project experiments on soil leaching and erosion for him. Her face lit up when she was able to answer several questions I had about soil sampling methods, with which I have limited experience.

At this point, my face may have been lighting up as much as hers, and I started having ideas on how to encourage her to keep pursuing her dreams. We had to leave to conduct our fieldwork, but she invited us to come back later for lunch when her husband returned.  As I drove around the community recording locations on my GPS where I would set up my forest plots, I knew that her morning was likely just as busy as mine, taking care of the livestock, preparing the lunch, and finishing up any number of other tasks she was doing before we arrived.

The conversation over lunch was just as interesting as those we’d had in the morning. We discussed everything from political changes that are affecting their family farming to how soybean monocultures are dominating the landscape. After lunch I conducted the interview with her husband as planned, and she participated in the conversation now and then. At some point I veered into the topic of whether men and women in the community were paid equally for a day of service. The husband said they were. The wife smiled and said, “Honey, don’t lie.” The researcher in me paid close attention to the conversation that followed, and the feminist in me almost jumped for joy seeing a woman speaking her mind. She gave several examples of situations where women were paid less than men for doing the same work, but the husband noted that in one case involving piecework, the man was paid more simply because he harvested more tobacco than everybody else did.  Yet, at the end of the interview, the husband turned to her and said he would take her to the “March of Daisies,” which is a march lead by rural women in Brazil fighting for agrarian reform and sustainable development, and to end domestic violence in rural areas.

Participating in the March of Daisies is certainly progressive, but I asked myself what this woman really wanted for herself.  Maybe she didn’t even know. Is it possible in her community to create a situation where she can be married to the man she loves yet still be able to pursue her studies in biology and the career of her dreams? I’m not even sure if this is something she wants, or if it is just my projection of what I believe would be a perfect life for her.  As for me, I ask myself where is the line that as a researcher I should not cross when it comes to inserting myself in the situation of a given community or family.

Despite those uncertainties, this time I decided to follow my instincts and act. I told her how highly I thought of her skills and asked if she wanted to work with me as my field assistant the next time I came to the community. The huge smile on her face convinced me I did the right thing. We have not talked about the pay rate yet, but she will certainly get paid as much as that guy who had those great tobacco harvesting skills. On one level, my decision was a way to show the entire community that I value this woman’s skills and knowledge as a young scientist. Most importantly though, I wanted her to understand herself just how valuable she is.

Flavia de Oliveira is an IAF Fellow whose research is supported by the Inter-American Foundation.

Being Bold for Change in Guatemala

Diverse but Not Dispersed: Fighting for Women’s Rights in Nicaragua and Across the Region

This year saw the IAF continuing to propel effective grassroots development even during a global health and economic crisis.