Reflections on the 20th Anniversary of Hurricane Mitch

Twenty years ago, Honduras and its neighboring countries were hit by the second deadliest Atlantic hurricane in recorded history. Hurricane Mitch killed approximately 7,000 people in Honduras and close to 4,000 in Nicaragua. Unofficial reports indicate up to 8,000 thousand more people across the region were never accounted for.

As a way to remember this historic disaster, current IAF grantees in Honduras and Nicaragua shared their reflections about Hurricane Mitch: how things have changed, how the work of their organizations today is a response to the long-term effects of the disaster, and how they are taking steps to mitigate the effects of future disasters.

A Storm of Historic Magnitude

Despite reaching category 5 status, the most destructive characteristic of Hurricane Mitch was its slow movement. For nearly a week, Mitch dumped torrential rains: official reports tallied some 36 inches in Choluteca, Honduras, with unofficial reports reaching 75 inches. Hurricane Mitch resulted in shortages of food and water, dangerous sanitation conditions, and outbreaks of malaria, dengue, cholera, hepatitis, and respiratory and gastrointestinal illnesses across the region.

Honduras accounted for $3.8 billion of the $6 billion in estimated damages, setting back the country’s development by decades. Some 1.5 million people (or about 20 percent of the population) were affected by the hurricane in Honduras, with 285,000 people left homeless and 25 small towns destroyed. 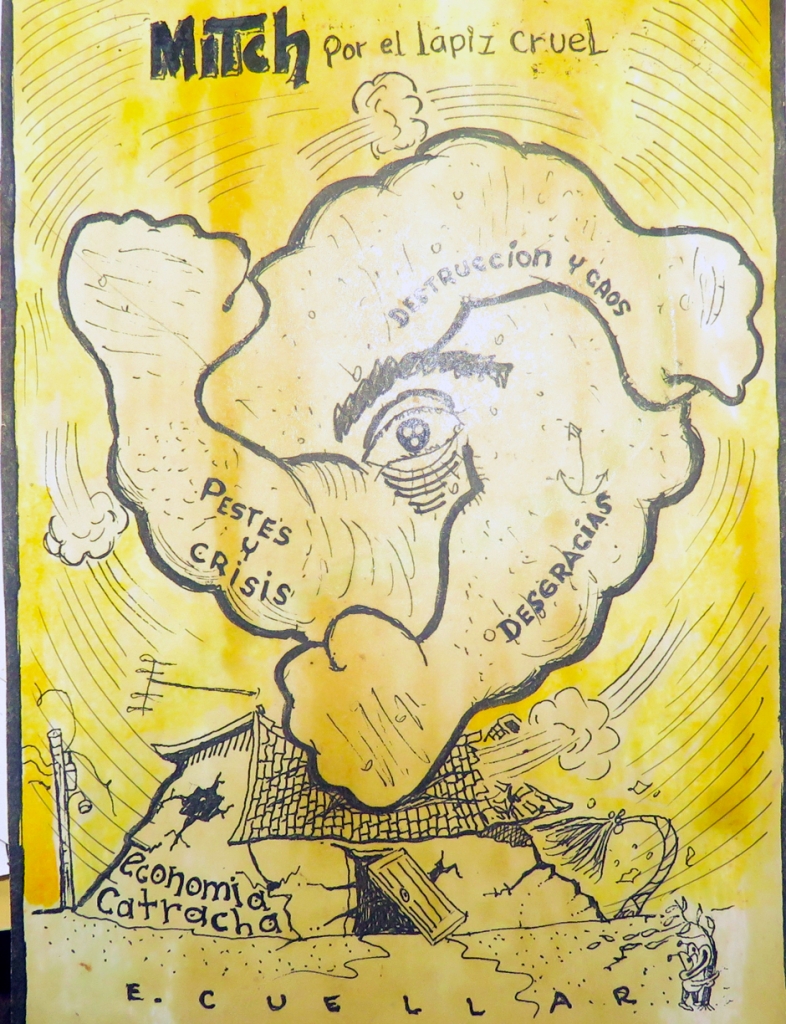 “The cartoon ‘El fenómeno,’ which depicts the storm’s physical and economic destruction, was published in the local newspaper shortly after Mitch.”

The damage from Hurricane Mitch was so great that it rendered maps obsolete. An estimated 70 percent of the transportation infrastructure was destroyed. The hurricane also severely affected crops like coffee, bananas, and pineapples, and killed thousands of cattle and other animals. Many families whose livelihoods depended on agriculture faced starvation. The shrimp industry, an important national export and a major source of employment in southern Honduras, was almost totally destroyed.

In Nicaragua, Mitch affected more than 800,000 people (or around 19 percent of the population) in around 72 (or around 59 percent) of its municipalities. Many health clinics were destroyed and the entire potable water and sanitation network suffered some degree of damage. Nicaragua lost around 5 percent of its GDP, with agriculture especially affected, and there was inestimable damage to forests and natural resources. Sedimentation and animal carcasses mixed with sewage and other materials contaminated the water in many places.

International assistance in the months and years following Hurricane Mitch totaled over $2 billion and changed the region. One important positive change was Nicaragua’s Law 337, approved in March 2000, which created the National System for the Prevention, Mitigation and Attention to Disasters and regional disaster reduction plans. Similarly, in Honduras, the disaster stimulated the creation of the National Risk Management System. Another positive outcome was community organizing and activism – at first to lead recovery and rebuilding efforts, and over time to undertake broader community development.

One of the IAF’s current grantees in Posoltega, Nicaragua, the Asociación Multidisciplinaria para el Desarrollo (AMDES), was established following Hurricane Mitch in the area where over half of the country’s deaths from the disaster occurred as a result of a landslide. Today AMDES is a thriving nongovernmental organization.

However, one of the negative outcomes of the hurricane was a growing dependency by the government and civil society on foreign aid. According to a 2004 World Bank Study on lessons learned from disaster recovery in Honduras, international agencies did not fully tap into local technical capacity for implementation, resulting in lost opportunities to boost national capacity.

“Six months after Hurricane Mitch, poor people no longer received provisions and food supplements. Many were hungry and struggling… even the worms in children’s stomachs, as you can see in the cartoon ‘En un lugar de la panza.’”

Francis Perez of AMDES does not forget her community’s struggles following the hurricane, but she hopes that lessons are being drawn from it to prepare a better response in the future. “From this painful experience, civil society organizations created spaces [for dialogue on] risk management,” she said. “Hurricane Mitch marks the before and after in terms of disaster prevention.”

The accounts of Martínez and Perez are among the many that reflect the wide range of disastrous and often tragic effects of Hurricane Mitch and the mixed perceptions of how the region is addressing disaster-related issues two decades into its aftermath.

Click on the links below to read the reflections.

The COVID-19 pandemic has worsened pre-existing inequalities experienced by vulnerable groups. Our grantee partners have found that increasing access to technology helps address these issues, connecting people to jobs, education, and social support.

Partnering to Respond to the COVID-19 Crisis

In the wake of COVID-19, we have broadened our alliances with current partners to help at-risk communities adapt and recover. We have also identified promising new private sector partners and funding opportunities to scale our efforts even further.